I dutifully watched this old animated film revolving around the Journey to the West stories about Princess Iron Fan in the interests of research, allowing for the fact that the film is so very old and such an early example of animation from Asia*. Before watching I assumed that I would find the film dated and that I would find it – at best – of curiosity value but somewhat old fashioned. To be sure, the print I watched online was of terrible quality, but this could not deter my enjoyment of the animation itself. I was surprised and delighted by how watchable this film still is (despite the crappy quality of the print). 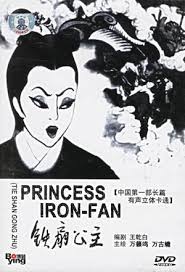 According to the Wikipedia article about the film the directors, brothers Wan Guchan and Wan Laiming**, were inspired by Walt Disney’s Snow White and the Seven Dwarves, and, to be sure, a Disneyesque influence does seem to be apparent. This sits beside more traditional looking Asian images; the juxtaposition didn’t jar on me. I felt that there were a lot of beautiful looking images that combined with a fun story and nice touches of humour to create an entertaining film.

If you want to watch this movie you can find it on youtube or on the US Library of Congress website***.

*“This animated adaptation of the Princess Iron Fan story from Journey to the West was apparently the first animated feature film to be made in China and the 12th worldwide (although it is only the 9th that still survives, as the films of Argentina‘s animation pioneer Quirino Cristiani are thought to be lost).”  – wikipedia

**The brothers Wan also directed another Journey to the West animation – Uproar in Heaven – which is gorgeous and which I will rewatch as part of my Monkey Magic project.

***Don’t you love how these big libraries are digitising all of this great content?